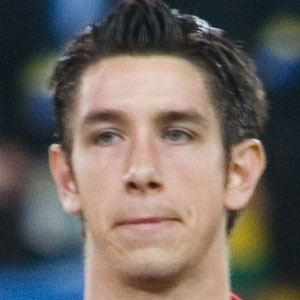 Australian goalkeeper who is best known for his years with Middlesbrough, Blackpool and Liverpool, winning the Football League Trophy title with Blackpool in 2004. Internationally, he has represented Australia at events like the 2004 Summer Olympics and the 2007 AFC Asian Cup.

He graduated from John Curtin Senior High School in 1998. He had signed with Bayswater City SC a year earlier.

Following the death of his six-year-old son Luca from leukemia in 2011, his Liverpool teammates as well as old teammates from other teams wore black armbands out of respect.

He had a son named Nico with girlfriend Dani Lawrence in April 2012. They also had a daughter named Romi in 2014. Luca was born out of a previous relationship.

He has played alongside Spanish right backer Javier Manquillo at Liverpool.

Brad Jones Is A Member Of