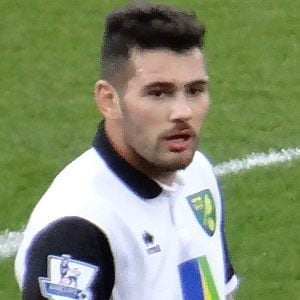 English soccer player who has been a standout midfielder for clubs like Northampton Town, Leeds United and Norwich City. He was a member of the Leeds squad which finished as runners-up in the 2009-10 Football League One season.

He was a member of the motorcycle stunt group The Imps as a child. He played for the Arsenal youth squad in 1997 and was released in 2002.

His goal against Arsenal in an FA Cup Third Round Replay was named Leeds United's Goal of the Season for 2010-11.

He has two younger brothers, who are also soccer players.

He has been teammates with goalkeeper Declan Rudd at Norwich City.

Bradley Johnson Is A Member Of