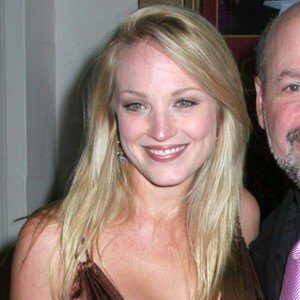 American singer and actress who toured the United States in the musical Jekyll and Hyde. She played the role of Siren in the television series Passions and Crickett in the CW series Hart of Dixie.

She went to New York University Tisch School of Arts and competed in the 1997 Miss Teen USA Pageant.

She sang in Wonderland: Alice's New Musical Adventure by Frank Wildhorn and guest-starred on many television shows, including How I Met Your Mother.

She grew up with family in Pasadena, Maryland. She married jeweler Douglas Kazanjian on June 29, 2014.

She was persuaded by James Barbour to audition for the show A Tale of Two Cities in 2008.

Brandi Burkhardt Is A Member Of