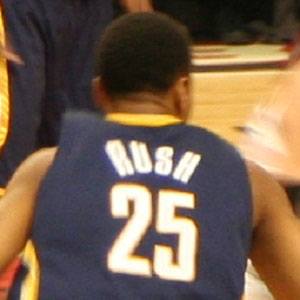 NBA guard/forward best known for winning an NCAA National Championship with Kansas in 2008. He was selected 13th overall in the 2008 NBA Draft by the Portland Trail Blazers, then traded on draft day to the Indiana Pacers. In 2015, he won an NBA Championship as a member of the Golden State Warriors.

He originally planned on skipping college and declaring for the 2005 NBA Draft but decided to commit to Kansas instead.

He tore his ACL during a pickup game in high school, then suffered the same injury in 2012 while playing for the Warriors.

He played alongside point guard Mario Chalmers at Kansas.

Brandon Rush Is A Member Of