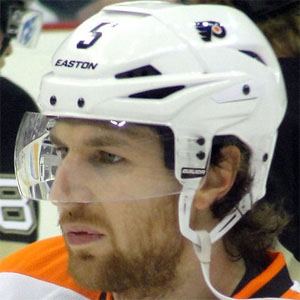 Left-shooting defenseman who made his NHL debut during the 2005-2006 season with the Atlanta Thrashers. He then went on to play for the Philadelphia Flyers for about nine seasons until a 2015 trade sent him to the Tampa Bay Lightning.

He played for the Portland Winter Hawks in the Western Hockey League.

The Thrashers drafted him eighth overall in the 2003 NHL draft.

He was born in Calgary, Alberta, Canada.

Left winger Ilya Kovalchuk was his teammate on the Thrashers.

Braydon Coburn Is A Member Of