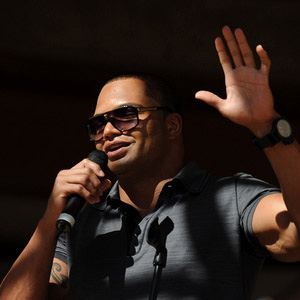 NFL linebacker who was a Super Bowl XLVII champion while playing for the Baltimore Ravens.

He was named to the All-Pac 10 Team while attending the University of California, Los Angeles.

He revitalized his career as a Chicago Bear, earning three Pro-Bowl appearances from 2006 to 2008.

He played with his older brother, fullback Obafemi, in 2003 on the Miami Dolphins and in 2007 on the Chicago Bears.

He played alongside Brian Urlacher as a member of the Chicago Bears from 2005 to 2007.

Brendon Ayanbadejo Is A Member Of