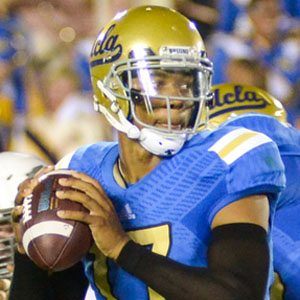 Quarterback who was a member of the UCLA Bruins from 2011 to 2014. He was selected in the fifth round of the 2015 NFL Draft by the Green Bay Packers.

He was Rivals.com's second-ranked dual-threat quarterback after playing at Chandler High School.

In his first game as a starter, he ran for a 72-yard touchdown on the first play of the game.

He was drafted by the Packers to serve as a backup to the team's starter, Aaron Rodgers.

Brett Hundley Is A Member Of