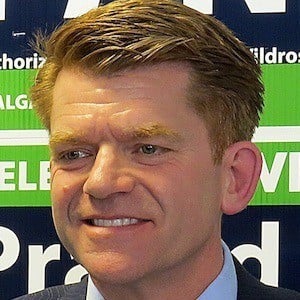 Canadian politician who was elected to be the Leader of the Official Opposition Party in 2015, only a few months after he was elected to the Wildrose Party.

After attended Bond University in Australia, he returned to his native country to attend law school. He spent more than a decade as a lawyer in Alberta.

He first held office in 2004, when he was elected to the House of Commons, representing Fort McMurray–Athabasca. He held the position until 2014.

He grew up in Kelowna, British Columbia.

He and Danielle Smith have both served as leaders of the Official Opposition Party.

Brian Jean Is A Member Of