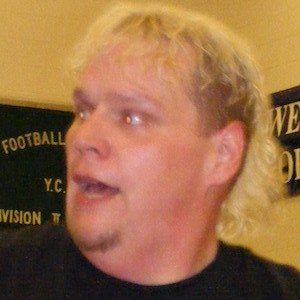 Former professional wrestler who went by the ring name Axl Rotten. He was known for his time with Extreme Championship Wrestling in the 1990s, where he teamed up with Ian Rotten to makeup the tag team The Bad Breed.

After dropping out of high school in 11th grade, he started training with Ricky Lawless in 1986.

He was part of WWE's One Night Stand in 2005, the promotion's tribute to the defunct ECW. A spine injury ultimately ended his career and forced him to use a wheelchair for the remainder of his life.

He died on February 4, 2016 due to an accidental heroin overdose.

He competed with Spike Dudley and New Jack in the ECW.

Brian Knighton Is A Member Of