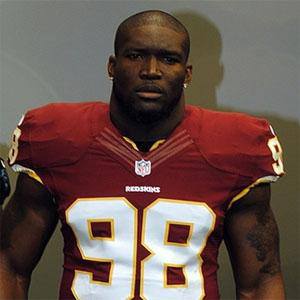 Star linebacker who began his career with the Washington Redskins in 2009 and was named to the NFL's All-Rookie team. He spent his first six seasons in Washington, then signed with the Tennessee Titans in 2015.

He played college football for Mack Brown's Texas Longhorns, earning the Lombardi Trophy and All-American honors in his senior year.

After an outstanding first two seasons, both of which culminated in a Pro Bowl selection, injuries forced him to miss the better of the 2011 and 2012 seasons.

He and Brian Cushing were two of only six rookies on the 2009 Pro Bowl team.

Brian Orakpo Is A Member Of