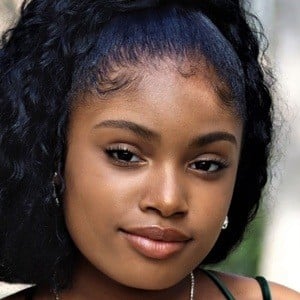 One of the stars of Brat's hit web series Mani, she is a versatile entertainer who would add reporter, co-host, correspondent, model, rapper and dancer to her arsenal before she even became a teenager. She booked minor parts for shows and movies including Sam & Cat, Insecure, Captain Underpants and Ben Affleck's Live By Night. She has been nominated for multiple Young Entertainers & Young Artist Awards.

She was just five years old when she began her acting and modeling career in Hollywood.

In 2019, she won a Jr. Oscar for Best Performance for her imitation of Tina Turner in an American Greeting commercial. She worked in correspondence with the FTS Kids News Network, HipHopRealEstate and Rock Your Hair. She would also be featured in Kid Fash Magazine as part of an anti-bullying campaign. She became a Justice print model. She appeared in a music video for a Black Eyed Peas song. She is also a songwriter and has released songs titled "Step Back No Bullies" and "We Must Rise Up, Stop Bullying."

Her grandmother Yolanda helped get her added to the Famous Birthdays website. She has a younger brother.

She danced in a viral video alongside Bruno Mars and Cardi B. She performed on stage alongside Debbie Allen and Tichina Arnold for Hot Chocolate Nutcracker. She has appeared in Dhar Mann's Motivational Series.

Brianni Walker Is A Member Of