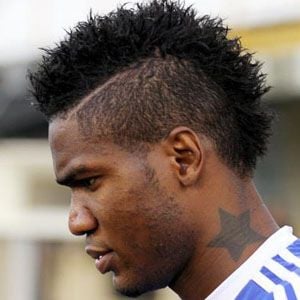 Nigerian soccer forward best known as a player for clubs like Ocean Boys FC and FC Dynamo Kyiv. He led the Nigerian national squad to their third Africa Cup of Nations championship in 2013.

He began his youth career with Bayelsa United before turning professional with Ocean Boys in 2006.

He won a Nigerian Premiere League title with Ocean Boys.

He married a woman named Damka.

He was teammates on the Nigerian team with Peter Odemwingie at the 2010 FIFA World Cup.

Brown Ideye Is A Member Of