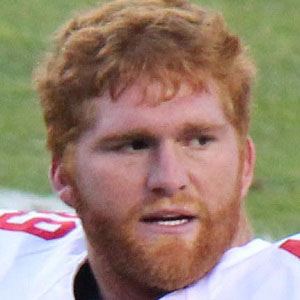 Fullback who was drafted by the San Francisco 49ers in 2011. He was previously a four-time All-Conference defensive end at the University of Central Florida and was named the Conference USA Defensive Player of the Year in his junior and senior seasons.

He played linebacker and tight end at Woodstock High School in Woodstock, Georgia.

He appeared on the cover of Sports Illustrated magazine with three of his 49er teammates in January 2012.

His parents are Bruce and Lisa Miller.

He caught his first NFL touchdown pass from quarterback Alex Smith in November 2011.

Bruce Miller Is A Member Of