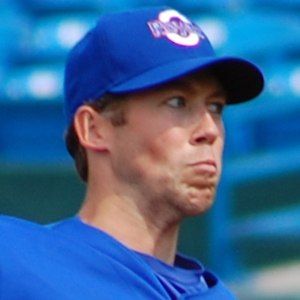 Pitcher known for being the first overall pick in 2002 Major League Baseball draft. He appeared in 26 MLB games from 2005 to 2010, winning his only game during his time with Kansas City in 2010.

He won a state championship as a senior in high school and was named Indiana's Mr. Baseball in 1999. He was drafted in the 37th round out of high school, but decided to play baseball at Ball State University.

After leaving the MLB, he joined the Hiroshima Toyo Carp of Japan's Nippon Professional Baseball league in 2011.

He married his wife Lauren in 2005. They have three children, Jack, Matthew, and Isabella.

Bryan Bullington Is A Member Of