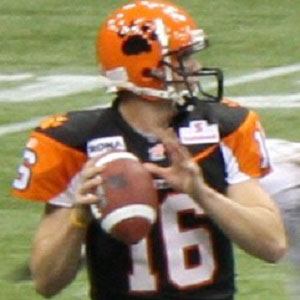 Quarterback who joined the Winnipeg Blue Bombers in the Canadian Football League in 2010 after five years with the BC Lions.

He was a standout quarterback at New Mexico State University, going his entire freshman year and all but the last game of sophomore year without throwing an interception.

Joining the BC Lions as a free agent in 2005, he was promoted from third-string quarterback to the starting spot after a series of injuries sidelined the first two.

He was born in Hutchinson, Kansas, the son of Tim and Connie Pierce.

Chris Leak was another standout quarterback in the Canadian Football League.

Buck Pierce Is A Member Of