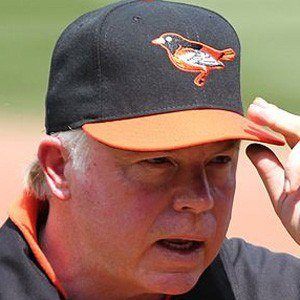 Baseball manager who coached the Yankees and Rangers before taking over the Baltimore Orioles in 2010.

His success with the Yankees' AAA team earned him a chance to coach the professional team.

His first act as coach for the Yankees was to trade most of the veterans and bring in new blood, which included Derek Jeter.

He married Angela Showalter in 1983 and he has a son named Nathan and a daughter named Allie. His father was a high school coach.

His success with the Yankees was partly based on support from the team owner George Steinbrenner.

Buck Showalter Is A Member Of