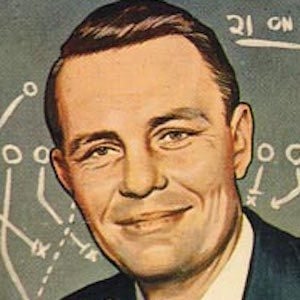 NFL coach who led the Chicago Cardinals to their second NFL title, which was their first league victory that wasn't disputed.

As a rookie fullback with the Lions, he won the 1935 NFL championship.

He was notoriously superstitious - none of his players wore number 13 jerseys.

His parents raise him in Slaton, Texas.

Never one to mince words, when Parker resigned as head coach of the Steelers, he told the team owner Art Rooney, "I can't win with this bunch of stiffs."

Buddy Parker Is A Member Of