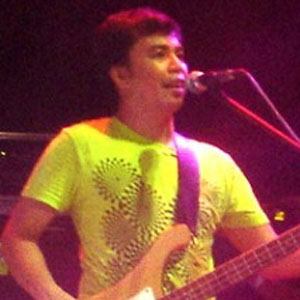 Though he also performed with indie and new wave rock bands called Cambio and The Dawn, this Filipino bassist and songwriter is most famous for his earlier work with The Eraserheads.

He joined The Eraserheads in 1989 and wrote several songs for the band's 1996 Fruitcake album.

He appeared with his Eraserheads bandmates in the 1995 comedy film, Run Barbi Run.

He grew up in Zamboanga City, Philippines.

He and guitarist Marcus Adoro were both members of The Eraserheads.

Buddy Zabala Is A Member Of