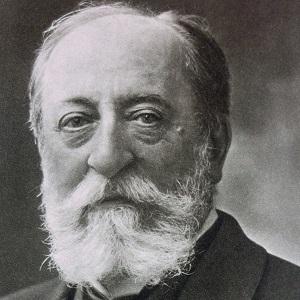 Romantic-era organist, conductor, and pianist who became known for his compositions "The Carnival of Animals," "Samson and Delilah," and "Danse macabre." His Piano Concerto No. 2, Cello Concerto No. 1, and Symphony No. 3 also retained popularity long after his death.

His perfect pitch was discovered while he was still two. He made his public concert debut when he was five, accompanying a violin sonata by Beethoven.

He became the first acclaimed composer to score a motion picture, "The Assassination of the Duke of Guise" from 1908.

He never knew his father, a government clerk who passed away three months after he was born. He wed 19-year-old Marie Laure Emile Truffot in 1875 at age 40. He had two sons with her. Both sons died in 1878.

He and Claude Debussy shared a mutual hatred for each other's work.

Camille Saint-Saens Is A Member Of