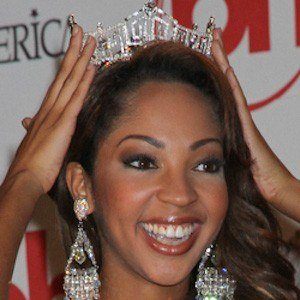 Pageant queen who rocketed to fame in 2010 after winning the title of Miss America as the 2009 Miss Virginia representative.

Her childhood was full of bullying. It was after one of the reigning Miss Virginias spoke at her school that she found a safe outlet in beauty pageants.

A model and singer, she graduated from the Barbizon Modeling and Acting School in 2002 and eventually went on to study broadcast communications at Virginia Commonwealth University.

She married her high school sweetheart Nathaniel Bernard Jackson Jr. in December of 2012.

She was succeeded by model Teresa Scanlan as the titleholder of Miss America.

Caressa Cameron Is A Member Of