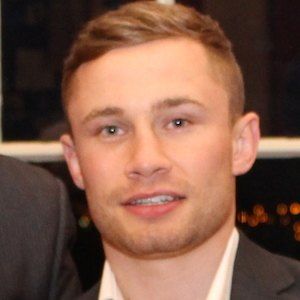 Orthodox super-bantamweight who became the Commonwealth Super-Bantamweight champion in September 2011, defeating Mark Quon by TKO in round four.

He won the Irish senior flyweight title in 2005.

He took silver at the 2007 European Union Amateur Boxing Championships in the featherweight class.

He was born to Flo and Craig Frampton. He married his wife Christine in 2013 and has a daughter, Carla, and a son, Rossa.

He defeated Steve Molitor via sixth-round TKO in 2012.

Carl Frampton Is A Member Of