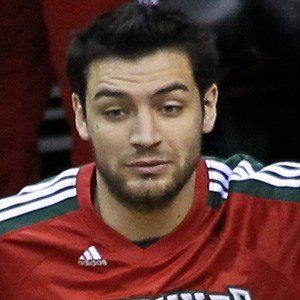 Argentine-born shooting guard who began his NBA career with the Detroit Pistons in 2004, then went on to play for the Toronto Raptors, Houston Rockets and Milwaukee Bucks.

He played in the Argentine leagues for the Olimpia de Venado Tuerto and Union de Santa Fe Teams, and then spent five years in the Italian league before entering the NBA.

After several years in the NBA he signed a $10 million contract with the Russian Super League club Khimki in 2008, which made him one of the top-earning basketball players in Europe.

He was born in Santa Fe, Argentina, the son of Carlos and Cristina Delfino.

He and Manu Ginobili became teammates on the Argentinian national team.

Carlos Delfino Is A Member Of