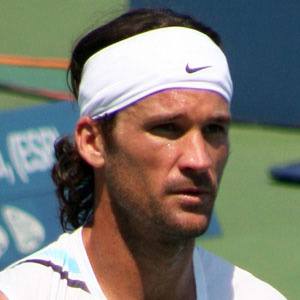 Former World No. 1 tennis player who was part of the Davis Cup-winning Spanish team in 2004.

He won his first Open, the French Open, in 1998, three years after turning professional.

He was forced to retire from tennis after a longstanding foot injury irreparably harmed his play.

He dated Italian tennis player Flavia Pennetta until 2007; he then began dating Spanish actress Carolina Cerezuela, with whom he fathered a daughter in 2010 and a son in 2012.

He played against some of the world's top tennis players, including Novak Djokovic.

Carlos Moya Is A Member Of