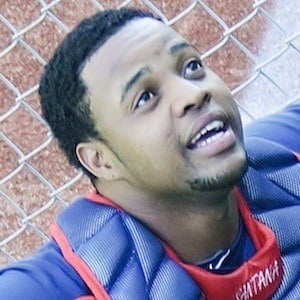 Baseball infielder who's played first base, third base, and catcher during his major league career. He made his MLB debut with the Cleveland Indians in 2010 and he helped the team reach the World Series in 2016.

He started his career in 2005 in the Los Angeles Dodgers' organization.

In both 2009 and 2010, Baseball America named him Cleveland's top prospect. He won a gold medal in the 2013 World Baseball Classic.

He grew up in Santa Domingo, the capital of the Dominican Republic.

He made his way to the Indians when the Dodgers traded him for Casey Blake in 2008.

Carlos Santana Is A Member Of