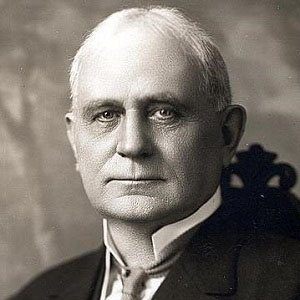 During the second decade of the Twentieth Century, this Democratic Party politician served as Speaker of the United States House of Representatives. Representing the state of Missouri's ninth district, he began serving in the House in 1893.

He spent his childhood in Kentucky and later graduated from both West Virginia's Bethany College and Ohio's Cincinnati Law School. In the mid-1870s, he opened a legal practice in Missouri.

He stirred conflict within the Democratic Party when, in 1917, he opposed then-President Wilson's call for American involvement in the First World War.

His marriage to Genevieve Davis Bennett Clark resulted in a son, Joel Bennett Clark, who served in the U.S. Senate during the 1930s and early 1940s.

He lost the 1912 Democratic presidential nomination to Woodrow Wilson.

Champ Clark Is A Member Of