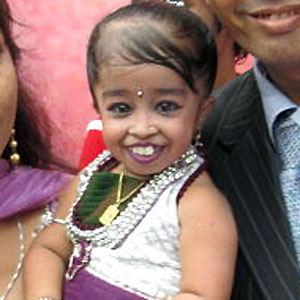 Certified by Guinness Records as The World's Shortest Woman, she stood 23 inches on her 18th birthday. She played Ma Petite on the FX series American Horror Story: Freak Show.

Her extraordinarily short stature is due to Achlasia, a sporadic mutation that causes dwarfism.

She appeared on a UK Channel 4 documentary and also on the Indian reality show Bigg Boss 6.

She was born in Nagpur, India to Kishanji and Ranjana Amge. She has four siblings. She got married in 2017.

The world's shortest man, according to Guinness was the Chinese He Pingping, who stood a good six inches taller than her.

Jyoti Amge Is A Member Of