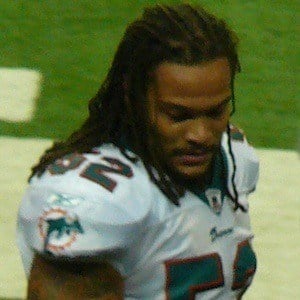 Former NFL linebacker best known for his time with the Miami Dolphins. He became the co-host of the show Hochman, Crowder & Krantz on 560 WQAM. He is also known for his role on the VH1 original series Baller Wives.

With an interest in the sport at a young age, he became a highly regarded linebacker for North Springs High School in Sandy Springs, Georgia. He garnered All-America recognition and eventually went on to play for the University of Florida.

He was born and raised in State College, Pennsylvania by his father, former NFL player Randy Crowder and Pauline Pope-Crowder. He stars alongside his wife Aja Crowder on Baller Wives.

As a cast member on Baller Wives he stars alongside other NFL legends including Michael Vick, Brent Grimes, and Chris Chambers.

Channing Crowder Is A Member Of