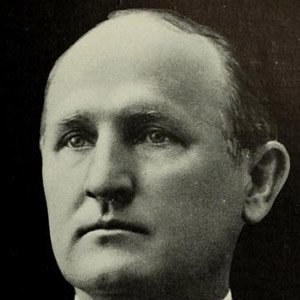 Remembered as an important public education advocate and reformer, this Solid South-era member of the Democratic Party served as Governor of North Carolina from 1901 until 1905. As governor, he was responsible for building nearly 700 new schoolhouses.

After graduating from the University of North Carolina at Chapel Hill, he became both a lawyer and a schoolteacher. He eventually served as Wayne County Superintendent of Schools.

In 2014, Duke University officially renamed a residence hall that had previously been named for Aycock after a historical review revealed that the educationally progressive governor had also been a prominent turn-of-the-century White Supremacist.

He and his nine older siblings grew up in Wayne County, North Carolina.

He first entered politics as a member of the Electoral College during the 1888 presidential campaign of Grover Cleveland.

Charles Aycock Is A Member Of