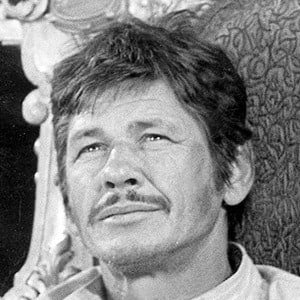 He doled out vigilante justice in several Death Wish movies, and starred in Once Upon a Time in the West and The Mechanic. His role as Danny King in the 1963 film The Great Escape brought him long-lasting fame.

He worked in a Pennsylvania coal mine as a teen before joining the U.S. Air Force during WWII.

In 1951, he landed his first big screen roles in the films The Mob, The People Against O'Hara and You're in the Navy Now.

He starred in over 14 movies with his second wife, actress Jill Ireland, whom he married in 1968. They remained married until her death in 1990. They had a child together named Zuleika.

He starred with Lee Marvin in The Dirty Dozen.

Charles Bronson Is A Member Of