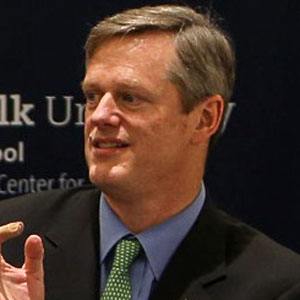 After serving his home state of Massachusetts as Secretary of both Administration & Finance and Health & Human Services, this Republican politician launched the 2010 and 2014 Massachusetts gubernatorial campaigns. Following the 2021 storming of the capital, he publicly called for President Donald Trump to be removed from office.

After graduating from Harvard, he received his Master of Business Administration from Northwestern University.

Born in Elmira, New York, and raised in Needham, Massachusetts, he grew up in a politically active family (his father worked under U.S. Presidents Nixon and Reagan). His marriage to Lauren Cardy Schadt resulted in three children.

He lost the 2010 Massachusetts gubernatorial race to incumbent and Democratic politician Deval Patrick.

Charlie Baker Is A Member Of