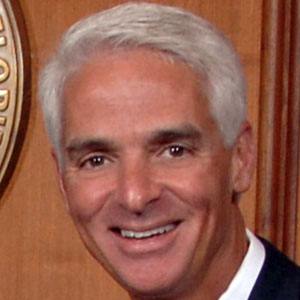 Affiliated first with the Republican Party and later (after a stint as an Independent) with the Democratic Party, this Florida politician served from 2007 until 2011 as his state's forty-fourth governor. He went on to launch a 2014 campaign for a second term as Governor of Florida.

After attending Wake Forest University (in North Carolina) and Florida State University, he earned a law degree from Alabama's Samford University. He began his political career as a member of the Florida Senate; he later served as Florida Education Commissioner and Florida Attorney General.

After initially opposing gay marriage, he issued a 2013 statement renouncing his previous views and expressing his support for the practice.

After supporting the 2012 re-election campaign of United States President Barack Obama, Crist became a member of the Democratic Party.

Charlie Crist Is A Member Of