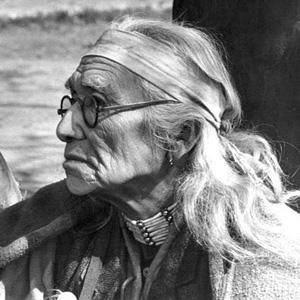 Academy Award-nominated Native American actor and author of My Heart Soars. The Canada Post issued a postage stamp in his honor.

He held a number of odd jobs, including longshoreman, construction worker, and school bus driver. Before beginning his television acting career, he was also the Band Chief of the Tsleil-Waututh Nation.

He received his first acting gig, in the CBC series, Cariboo Country, when he was sixty years old.

He was born Geswanouth Slahoot in North Vancouver, British Columbia, Canada. Several of his grandchildren and great grandchildren, including Charlene Aleck and Lee Maracle, became actors and/or writers.

He co-starred with Dustin Hoffman in the 1970 film, Little Big Man, for which he became an Academy Award nominee in the category of Best Supporting Actor.

Chief Dan George Is A Member Of