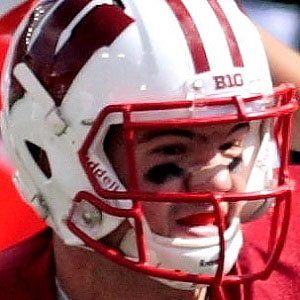 Former linebacker who was voted 2013's Big Ten Defensive Player of the Year while playing for the Wisconsin Badgers. He was drafted by the San Francisco 49ers in 2014 and had an outstanding rookie campaign but elected to retire shortly after the season, citing concerns about the long-term effects of concussions.

He lettered in football, basketball, tennis and track at Archbishop Alter High School in Kettering, Ohio.

While at Wisconsin, he won the 2014 Big Ten Conference Outstanding Sportsmanship Award and was also voted the school's Student-Athlete of the Year.

He and All-Pro 49ers linebacker Patrick Willis both retired following the 2014 NFL season.

Chris Borland Is A Member Of