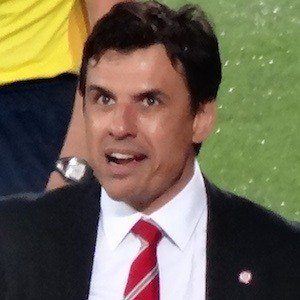 Known for his tenure as the manager for the Wales Dragons national soccer team. He rose to prominence as a defenseman in the English Premier League and Football League Championship between 1986 and 2002.

He made his professional debut for his hometown team Swansea City at age 17. He made his Premier League debut with the Blackburn Rovers in 1995.

He began his managerial career in 2003 when he was hired to coach Fulham FC. He led Wales to successfully qualify for the UEFA Euro 2016 tournament.

He was born and raised in Swansea, Wales.

He took over as head manager for the Welsh national team following the passing of Gary Speed in 2012.

Chris Coleman Is A Member Of