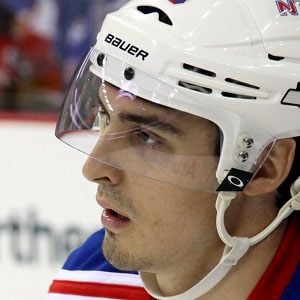 Left wing who made his NHL debut on April 16, 2012, in a playoff game for the New York Rangers; selected 19th overall in the 2009 NHL Draft by the Rangers.

He played hockey for Boston College, and in 2010 he won both the NCAA Championship, and a gold medal in the Junior World Championships in Saskatchewan.

He scored his first career hat trick on November 30, 2013, in a 5-2 Rangers victory over the Vancouver Canucks.

He grew up in Boxford, Massachusetts, where he and his family were fans of the Rangers' rivals, the Boston Bruins.

Chris Kreider Is A Member Of