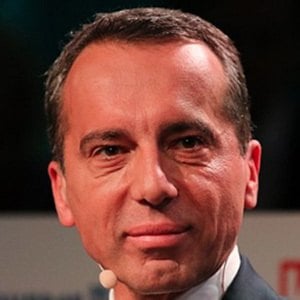 He originally started his career serving as the SPO's parliamentary group leader. He then served as CEO of the Austrian Federal Railways as well as the Community of European Railway and Infrastructure Companies. He was first appointed Chancellor of Australia in May of 2016.

He is also known for having served on the Board of Trustees for several companies and organizations including FK Austria Wien as well as Konzerthaus Vienna and Rechtskomitee LAMBDA.

He married Eveline Steinberger and together they have a daughter. He also has three sons from a previous marriage.

He was sworn into office on May 17th, 2016 by outgoing President Heinz Fischer.

Christian Kern Is A Member Of