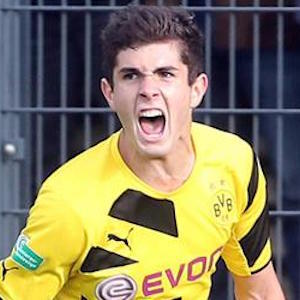 Midfielder who became a rising star through the US Youth National Teams, including captaining the US U-17 national team at the U-17 World Cup. He made his senior debut for Borussia Dortmund in 2016 and played there up until 2019 when he signed with Chelsea FC.

He played for PA Classics as a youth and for the Harrisburg City Islanders as a teenager.

He was named to the Borussia Dortmund first team after just 15 games in the club's academy.

He was born and raised in Hershey, Pennsylvania. His father, Mark Pulisic, was also a professional soccer player. He has an older sister, Devyn. His brother has autism.

He made his first team debut for Borussia Dortmund as a substitute for Adrian Ramos.

Christian Pulisic Is A Member Of