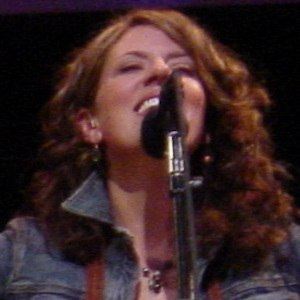 Christian singer and worship leader who rose to fame as one of the lead members of the religious band Watermark with her husband Nathan. She is also a successful solo artist, with her albums Into the Glorious and Let it Be Jesus both topping out at #2 on the US Christian charts.

She and her husband were working as worship leaders when they began writing songs together in 1995. The following year they released their debut album under the band name Sons & Daughters.

During her time with Watermark, the band was signed to Rocketown Records, a label owned by Michael W. Smith.

She was raised in Oklahoma by her father, a pastor, and her mother, a piano teacher. She and husband Nathan have three children named Noah, Elliana, and Annie Rose.

She helped found the Passion City Church with Louie Giglio and signed with his label sixstepsrecords.

Christy Nockels Is A Member Of