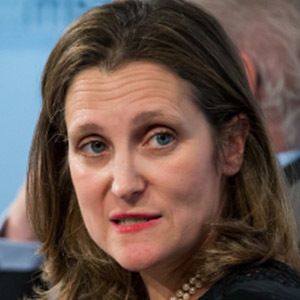 She received her bachelor's degree in literature and Russian history from Harvard University.

She authored the 2012 New York Times bestseller Plutocrats: The Rise of the New Global Super-Rich and the Fall of Everyone Else.

Her mother Halyna and father Donald were both lawyers. She married New York Times reporter Graham Bowley. They have three children.

She served in the cabinet of Canadian Prime Minister Justin Trudeau.

Chrystia Freeland Is A Member Of