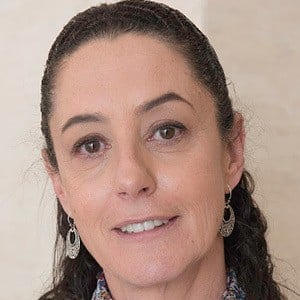 Politician who rose to fame as the mayor of Mexico City when elected in July 2018. She became the first elected woman and person of the Jewish faith elected to the post with her win.

She earned her BS in physics from National Autonomous University of Mexico in 1989. She later received her master's in 1994 and PhD in 1996.

She worked as the Secretary of the Environment for Mexico City's government between 2000-2006. She was one of the recipients of the 2007 Nobel Peace Prize as part of the Intergovernmental Panel on Climate Change.

She has one daughter from her first marriage. Her parents' names are Carlos and Annie.

She served as the Secretary of the Environment of Mexico City while Andrés Manuel López Obrador was mayor.

Claudia Sheinbaum Is A Member Of