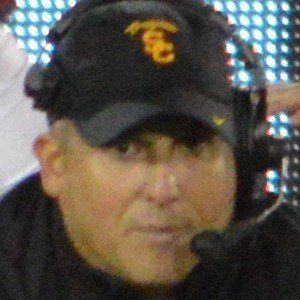 College football coach who became head coach of the USC Trojans in 2015. He perviously served as a coach for the Duke Blue Devils, the Houston Cougars, and Memphis Tigers.

Throughout college, he played as quarterback for Auburn. He later transferred to Houston where he graduated with a degree in mathematics and science.

He led the USC Trojans to the Pac-12 South Division championship in 2015.

His father Kim was also a football coach for colleges and the NFL. He and his wife Angela have three children named Reid, Turner, and Aubrey. His brother Tyson has also worked in coaching football for universities.

When he was hired as quarterbacks coach for USC in 2010, he worked under head coach Lane Kiffin.

Clay Helton Is A Member Of