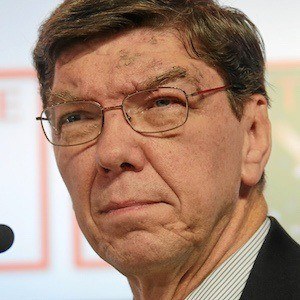 Author and Harvard Business School professor behind the New York Times bestselling book How Will You Measure Your Life. He first rose to fame for his book The Innovator's Dilemma in 1997. He was also the co-founder of Innosight, an innovation-based consulting and investment firm.

He graduated from Brigham Young University and went on to the University of Oxford, achieving degrees in applied econometrics and the economics of less-developed countries.

As a member of the Church of Latter-Day Saints, he served as a missionary in Korea and as a bishop, amongst other leadership positions within the church.

He and his wife Christine had five children. His son Matthew gained popularity playing basketball for Duke University.

He served as a White House Fellow in 1982 and 1983 assisting former transportation secretary Elizabeth Dole.

Clayton Christensen Is A Member Of