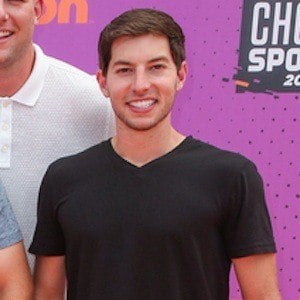 One of the 5 co-founders of the enormously popular YouTube channel Dude Perfect, which has earned over 58 million subscribers. The channel is a sports and entertainment brand that specializes in trick shots and comedy. They have done trick shots with ping pong balls, boomerangs, soccer balls, water bottles and bowling balls.

He came together with his brother Cory Cotton as well as Cody Jones, Tyler Toney, and Garrett Hilbert to form the YouTube channel in June of 2009 while attending Texas A&M University.

The Dude Perfect channel went viral following the release of their video "World's Longest Basketball Shot." His Instagram has listed him as a "big fan of Jesus".

He also has a sister named Catherine. He became engaged to Aubrey Ellett in August 2017 and they married in December of that same year.

NFL coach Pete Carroll was featured in an episode of Dude Perfect, the Seattle Seahawks Edition.

Coby Cotton Is A Member Of