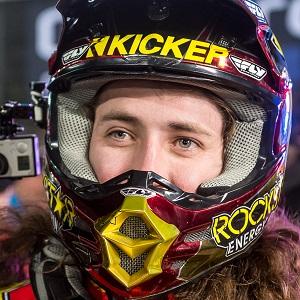 Ranked among the world's top ATV freestyle riders, he is a Winter X Games veteran who competes in snowmobiling events. He's taken home gold in the Snowmobile Freestyle event and he has performed with traveling shows such as Nitro Circus and X Pilots. His older brother Caleb Moore tragically died while competing at the 2013 Winter X Games.

He was 12 years old when he started riding ATV's, deciding to follow his brother Caleb's footsteps by attempting ATV freestyle. He persevered through many broken bones, concussions, and losing most of his front teeth.

In an emotional and triumphant return to snowmobiling following the death of his brother due to an injury at the previous Winter X Games, he won gold in honor of Caleb with a perfect performance in Snowmobile Freestyle.

Born in Bedford, he grew up in the Texas towns of Wheeler, Abilene, and Krum.

He is affiliated with Nitro Circus like Jolene Van Vugt who starred on the MTV series.

Colten Moore Is A Member Of