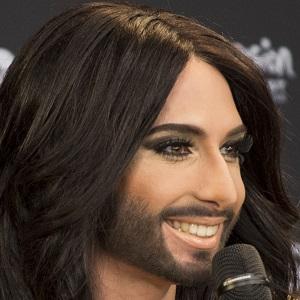 Austrian singer and drag queen who rose to fame after winning the 2014 Eurovision Song Contest. Her song "Rise Like a Phoenix" hit #1 in her native country after she sang it during the contest.

She appeared on the talent series "Starmania" after studying fashion. She became a member of the band Jetzt Anders! during this time.

Her victory at the Eurovision song contest angered some conservative viewers and pundits who objected to her drag queen persona.

She was born Thomas Neuwirth to parents Helga and Siegfried Neuwirth.

She succeeded 2013 winner Emmelie De Forest as champion of the Eurovision Song Contest.

Conchita Wurst Is A Member Of