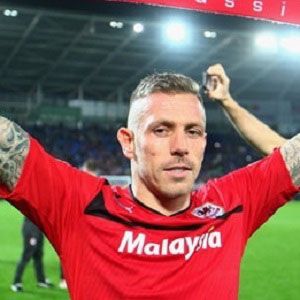 Journeyman Welsh winger who played all over the English and Scottish leagues and was a member of the Wales national team from 1998 to 2013.

He began his career with the youth system of Norwich City and eventually scored the first team's 5,000th goal in August 1998.

He started his own foundation to help disadvantaged children in Sierra Leone, a town he personally visited.

He raised three children with Claire Jansen, whom he was married to from 2006 until 2012.

He played a few seasons alongside Steven Gerrard on Liverpool.

Craig Bellamy Is A Member Of