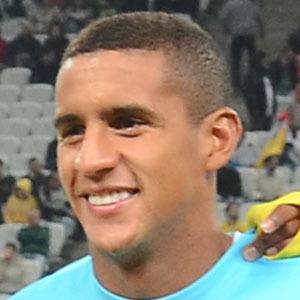 Colombian professional football player who is best recognized for his work as a goalkeeper for the Al-Fayha club within the Pro League. He is also known for his work as a keeper on the Colombian national and Olympic teams as well.

He started his career with the Boyaca Chico club, making his debut at the age of sixteen in the Copa Colombia. That same year he also played on the Columbian Under 17 national team. He joined their Olympic team in 2016.

He was voted Meilleur Gardien in the Toulon Tournament in 2013. He is also known for having won the Copa Libertadores in 2016 and the Copa Colombia in 2012 and 2013 as part of the Atletico Nacional club.

He was born and raised in Manizales, Colombia and shared a photo with his mother Sonia to Instagram in May of 2018.

He was listed on the 23 man squad for the Copa America in 2015 alongside fellow keeper for the Colombian national team David Ospina.

Cristian Bonilla Is A Member Of