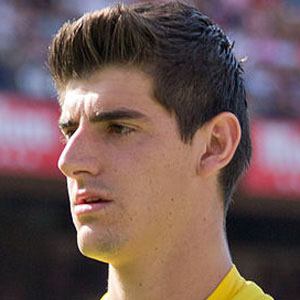 Belgian soccer goalkeeper who played for Chelsea FC and the Koninklijke Racing Club Genk. From 2011 until 2014, he was on loan to Atletico Madrid. In 2018, he joined Real Madrid. He also played on Belgium's national team.

He began his youth career as a left back for Bilzen V.V. After joining the youth division of K.R.C. Genk, he became a goalkeeper.

He was named the most valuable player in the 2013 Copa del Rey Final.

His sister Valerie Courtois is a professional volleyball player. He has a daughter named Adriana and a son named Nicolas with now ex Marta Dominguez.

He caused a minor scandal when he publicly flirted with the ex-girlfriend of teammate Kevin De Bruyne.

Thibaut Courtois Is A Member Of