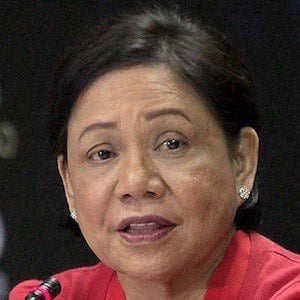 Filipina politician who served as a member of the Philippine House of Representatives from 2001 to 2010. She was elected a Senator in 2013.

She received a degree in Business Administration from the University of the Philippines, Diliman, and went on to receive her Master's degree in the same field from New York University.

She served as Chairwoman of the Congressional Spouses' Foundation from 1998 to 2000.

She, like first female president of the Philippines, Corazon Aquino, had a successful career as a politician and was married to another successful politician (both Aquino and Villar had senator husbands).

Cynthia Villar Is A Member Of