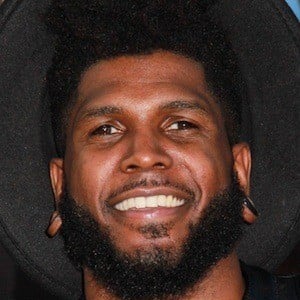 Season nine contestant on So You Think You Can Dance who finished as the co-runner-up with Tiffany Maher to winners Eliana Girard and Chehon Wespi-Tschopp. His style of dance is categorized as popping/animating.

He was eight years old when he started dancing, but took a hiatus to play sports. He picked dancing back up when he was fifteen.

He was featured as a dancer in the movie Step Up: All In, and in the show Austin & Ally. He was signed by Xcel Talent Agency in December of 2011 as part of the dance movement to dubstep music.

He was born in Dallas, Texas and grew up in Atlanta, Georgia. He previously dated Jasmine Harper.

After his performance that would send him to the Top 20 of So You Think You Can Dance, Nigel Lythgoe claimed that he had never seen a performer like Cyrus.

Cyrus Spencer Is A Member Of

Step Up: All In
32 Year Olds
Dancers
First Name Cyrus